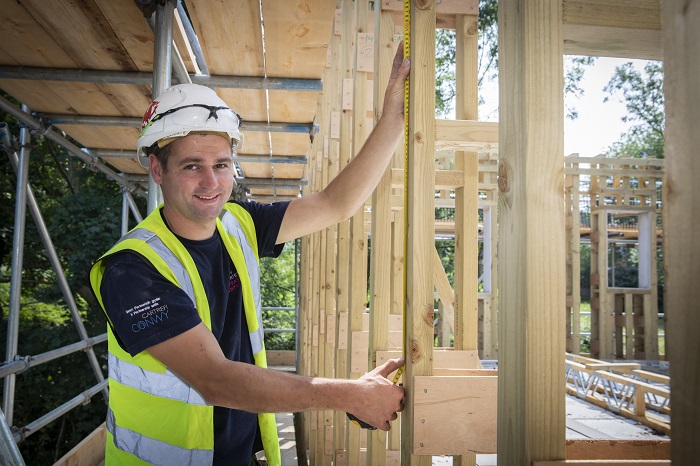 A social enterprise has announced ambitious plans to build nearly 350 carbon zero homes after clinching a five-year deal with the company that developed them.

Creating Enterprise have signed a contract with Beattie Passive giving them exclusive rights to their pioneering Passivhaus build system in North Wales until 2025.

Around 50 new jobs will be created, and they have also pledged to use local sub-contractors and suppliers wherever possible to boost the regional economy.

The concept is flexible which means the system can also be used to make one-bedroom pods or build two-storey family homes with three, four or more bedrooms.

Plans to build more than 100 of the revolutionary modular properties are either underway or in the pipeline across North Wales in Anglesey, Conwy and Denbighshire.

The venture is believed to be the first of its kind by a social enterprise in Wales.

It was made possible by partnering with Beattie Passive, one of the UK’s leading manufacturers of advanced Passivhaus homes, which can save residents up to 80 per cent on annual energy costs.

Creating Enterprise, a subsidiary of housing association Cartrefi Conwy, are planning to open new pop-up factories wherever they have a development.

The aim is to provide job and training opportunities for unemployed people in those areas.

According to Adrian Johnson, the managing director of the commercial services arm of Cartrefi Conwy, the partnership ticked all the Welsh Government’s boxes.

The modular properties will create much-needed new homes and employment whilst helping to tackle fuel poverty and climate change.

“This new long-term agreement allows us to build the very best in terms of energy efficient, carbon zero homes, certified by Beattie Passive.

“The timber-framed homes are built from sustainable materials, using modern methods of construction.

“They will be locally manufactured using readily available materials from local suppliers and the frames are constructed in an on-site pop-up factory, lowering our carbon footprint.

“The properties are very advanced in terms of building control standards, exceeding sound-proofing requirements and have in-built radon gas barriers.

“It’s up to passive standard which means they are going to be the most energy efficient homes you can build in the UK.

“As a result, the average fuel cost for a three-bedroomed house will be around £100-£150 per annum as opposed to the £1,000-a-year you would spend in a conventional property of the same size.

“The plan is to create nearly 350 new homes over the next five years and we can only do that by collaborating with the other registered social landlords and local authorities in North Wales.

“Currently, we have full-time joiners or modular technicians on our books, and we supplement them with local subcontractors wherever we are and overall we are likely to be creating 50 new jobs.

“The level of interest we are seeing is phenomenal so the potential for these modular properties is massive.”

It was a sentiment echoed by Ron Beattie, Managing Director of Beattie Passive.

He said: “We are very pleased to be partnering with Cartrefi Conwy and Creating Enterprise to deliver Beattie Passive homes in North Wales.

“We believe they exemplify the values and goals of Beattie Passive and look forward to building upon our partnership through the new licence agreement.

“It will help us provide training to create a new workforce who are able to deliver the homes of the future.

“We also see this as a good strategic move because the Welsh Government is ahead of the game in terms of reducing carbon emissions and finding innovative ways of achieving their goals, whilst creating employment and much-needed new homes.”

Creating Enterprise, based at the Cartrefi Conwy Business Park, in Mochdre, near Colwyn Bay, was established in 2015.

It also runs an Employment Academy to provide opportunities, training and qualifications for unemployed local people, including Cartrefi Conwy tenants.

Cartrefi Conwy Chief Executive Andrew Bowden said: “This product will revolutionise the social housing market in North Wales and the partnership between Creating Enterprise and Beattie Passive will be giving employment opportunities to people who are furthest from the jobs market.

“As a social enterprise we actually want to make a profit, and then we recycle that profit for social good which actually bring tenants back into paid employment. This is profit with a purpose.”