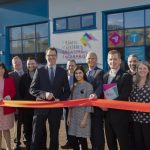 An innovative new organisation is leading a business revolution that can help communities across Wales and empower local people to realise their own potential.

That was the message of Lee Waters AM, the Welsh Government’s Deputy Minister for the Economy and Transport, at the official launch of the Social Enterprise Academy.

Creating Enterprise, a subsidiary of housing association Cartrefi Conwy, has secured the licence to set up innovative Wales-wide learning and development programmes for companies, social enterprises and public bodies.

The Social Enterprise Academy are using the model trailblazed in Scotland that’s now been replicated across 14 countries as far afield as Canada, China and Australia and Africa.

Creating Enterprise, based in Mochdre, near Colwyn Bay, which was recently named as one of Wales’ fastest growing companies at the Fast Growth 50 awards, is working in partnership with the Wales Co-operative Centre who are delivering the programmes in South Wales.

It is a key part of the Creating Enterprise’s ambitious growth plan and will also be using its profits for the benefit of Cartrefi Conwy tenants.

Mr Waters described the Academy as a “catalyst for change” which would hopefully replicate the success of the concept in Scotland.

He was pleased to hear that 65 per cent of the 6.000 social enterprises in Scotland were led by women, employed 88,000 people and pumped more than £6 billion into the economy.

The Deputy Minister said: “I think the Academy has huge potential and I have a lot of faith that it will be a success.

“It has the potential to be a very powerful economic development tool. Social enterprises have already generated billions of pounds in Wales and with the direction and vision offered by the Academy can influence the sector in parts of the economy where the private sector is not flourishing.

“Social enterprises have a key part to play in keeping wealth within our communities, and the important thing about them is that it’s still an enterprise. It’s still about making money and running successful businesses, what defines them is what they do with the profit, and the values that you embody.

“The Academy is not going to reverse every economic problem that we’ve ever had. But it has the power to empower people to help people to realise their own potential, because they’re acting in the spirit of common purpose. It is about being part of a business, but it’s also unleashing a wider potential, and I think that just on a human level is a very powerful idea.

“In addition to the Academy, I’m also very pleased that we recently announced the approved projects for the £4.5 million Foundational Fund challenge fund. There are a number of very good projects in North Wales approved but what is also encouraging is that over 20 of the 52 projects approved are social enterprises.”

According to Sharon Jones, the Business and Partnership Director, there had been “overwhelming” interest in the Academy and courses were already being delivered in all the six counties of North Wales.

She said: “I would like to thank Welsh Government who have provided us with start-up funding over the next three years to enable the Academy to be brought here to Wales and also on a more local level for Conwy County Borough Council who have awarded us a bursary fund over the next 12 months to enable third sector and social enterprise organisations based here in Conwy to access Academy programmes at a reduced rate.

“We have a three year business plan and the really great thing about the Academy is that it is open to everyone.

“It has programmes aimed at Third Sector and social enterprises, through the enterprise and social impact strands.

“It also has programmes aimed at private sector businesses through the leadership and learning strands which are also relevant to social enterprises and it has unique programmes written just for the public sector called enterprising leadership to look at how they can be more enterprising in delivering public services.

“We have 11 facilitators who are leaders in social enterprise and in the business community across North Wales,

“They have a huge amount of experience and are inspiring and transformational leaders.

“It’s about people who have walked the walk sharing insights into their success as business leaders.”

Among the facilitators in North Wales is Menna Jones, the chief executive of the Antur Waunfawr, who was worked at the social enterprise in Waunfawr, near Caernarfon, for 25 years.

She said:  “I have had to learn something new, if not every day then every week, because the range of skills we need to be social entrepreneurs means we need take in so much information.”

It was a sentiment endorsed by Jocelle Lovell from the Wales Co-operative Centre,

She said: “We’ve identified just over 2,000 social enterprises across Wales who contribute over £3 billion to the economy.

“I think quite often people don’t think of social enterprises as being profitable and sometimes they think not for profit isn’t a good thing. We all need a profit to be sustainable.

“It’s what you do with that profit that really makes the difference – 76 per cent of social enterprise pay the living wage and over 57 per cent say that their workforce live within 10 miles of where they go to work.

“We have local jobs for local people, keeping that money local and recycling it in those communities.”

Nazia Ali, who was there representing the original Social Enterprise Academy in Scotland, said: “The collaboration that takes place at community level has blown me away and to create lasting change we all have to come together.

“Social enterprise is a vehicle that can create lasting change. Our ethos is that we are learning to change the world.”